Discovering C.K. Crigger’s Newest Novel, Two Feet Below, and the Author Behind the Books

If you like the old West, and female sleuths, I am sure you will want to read C.K. Crigger’s newest novel, Two Feet Below.  However, do not tag this lady as being just a mystery writer. I think after reading about her, you will find that she is a multi-faceted award winning author. 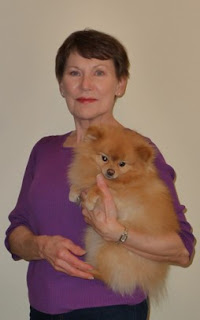 C.K. Crigger lives with her husband and three feisty little dogs in Spokane Valley, Washington. She is a member of Western Writers of America. In 2009 she was a Spur Award (from WWA) Finalist in the audio category for Letter of the Law, 2007 finalist in the Short Story category for “Aldy Neal’s Ghost”, and the 2008 Winner of an Eppie Award for “Black Crossing”.  This year, her short story, “Left Behind,” has been nominated for a Western Fictioneers' Peacemaker Award.
Tell us about the genre of your work.
I write in several different genres, including westerns, time-travel, fantasy, and mystery/suspense. My latest release, Two Feet Below, is a mystery/suspense set in the 1890s American West, so I will talk mostly about this one today.
Why did you choose this genre?
First of all, I love history, especially regional history. Second, my early reading experiences included the old pulp westerns that my folks read, so I guess I am hard-wired for the western experience. My own personal touch is that I set my stories in my neck of the woods, which means mine are not in the typical cowboy, Indian, cavalry style.
What are some of your books, stories that have been published?
I have written a five book time-travel series featuring Boothenay Irons, my butt-kicking gunsmith heroine. I am shopping the fifth one around now. The previous four are published in print and e-book by Amber Quill Press and in audio by Books In Motion. I have two fantasies’, one of which is still looking for a publisher, and four westerns. Black Crossing was the 2008 Eppie winner in western/historical, and Letter of the Law was a 2009 Spur Award finalist in audio. It is out in print, also. Then there’s the China Bohannon stories, One Foot on the Edge and Two Feet Below, the latter just released by Oak Tree Press’s Wild Oaks imprint. One of my short stories, “Left Behind” is included in the 2010 WWA Anthology, Roundup! “Great Stories of the West,” published by LaFrontera Publishing. My story has just been nominated for a Western Fictioneers’ Peacemaker award.  Does my heart good! 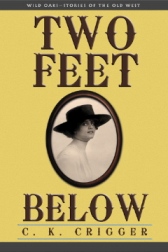 Since Two Feet Below is hot off the press, I will concentrate this one. The ISBN is 978-1610090070. At present, it is available through Amazon.com and the Oak Tree Press www.oaktreebooks.com bookstore.  It can also be ordered through any bookstore, of course. I have begun a website for China Bohannon, my intrepid 1890s bookkeeper turned sleuth. You will find her here: http://twofeetbelow.blogspot.com/ and on her website at www.ckcrigger.com.
How do you come up with the names of places and characters in your books?
The primary setting for all my books is right here in the Inland Northwest, more specifically, Eastern Washington and North Idaho. We have all the varying landscape items a writer needs, city or small towns or country. There are lakes, rivers, mountains and even semi-desert. Most of the time I use real place names, and only occasionally make one up.  For characters, I like fairly simple names, but they have to suit the period, and they have to be distinctive enough that a reader can remember who s/he is. I am not quite so picky about secondary characters but I like everyone to have a little individual pizazz.
How did you develop the character of your protagonist in this book?
China Bohannon is a little down on her luck. She came from a rich background, but after losing her place in life, she’s not about to give in to the weepy wailies. China can stand up for herself. Unfortunately, she has a propensity for overestimating her abilities and that often gets her in trouble. My job is to put her into, and then get her out of dangerous situations as she pokes around various crimes. If I can use a little humor in doing so, then China’s personality comes clear.
What about an antagonist…is there a unique “bad guy” or a recurring nemesis of any kind?
Oh, sure. There are several “bad guys,” each a little “badder” than the first. Then there’s the one who China soon suspects, but can’t get her uncle, Monk Howe, or Gratton Doyle, owners of the detective agency she works for, to consider. Frustrating, to be sure.
What is your favorite thing about your book?
This is easy. The dog and the baseball game. Oh, yeah, and the loggers China meets along the way. Or the fight she has with the Wallace prostitutes, or...oh, heck. I had fun with all of it.
How is writing in the genre you write, different than other genre?
Two Feet Below, a western suspense, has a western setting, and perhaps a western sensibility, if you can figure out what that is. People are familiar with firearms and they are not dismayed by the rough-and-ready. On the other hand, part of the action takes place on the city scene, and in the 1890s, Spokane, Washington was a big modern city even by East Coast standards.
Why and when did you begin writing?
I have written “silly” stories for as long as I can remember, but about fifteen years ago, I woke up one day with the realization that if I did not get serious “NOW” it would be too late. So I got serious. Gradually, I am emptying my head of all those first ideas. Trouble is, I get one done and three more pop up. What is a woman to do?
What is your writing schedule?
I write every day, at least a little bit. A day without writing is a wasted day!
What projects are you working on now, or plan for the future?
I am shopping around the fifth Boothenay Irons/Gunsmith book, titled Gone Rogue, and a fantasy tentatively titled Sleeping Beauty. I am working on a contemporary mystery, and after that, unless somebody wants another China Bohannon book or another Boothenay Irons, I will be working on a historical novel involving bush horseracing and bootlegging during prohibition. Got a few more in mind, too, but I may not live long enough.
What kind of advice or tips to you have for someone who wants to write (especially mystery)?
Three words. Go for it! I find mysteries the most difficult of all genres to write because the plotting has to be meticulous, but often a writer will not know if s/he can or cannot get it down until s/he tries. Study writers that you love. How did they work all those clues in?
Are there any other comments, advice or tips that you would give to beginning writers?
Write a story you would want to read. Rewrite, rewrite, rewrite. Join a good critique group.
What do you do when you are not writing?
I garden in season, walk my dogs, read. Go fishing, once in a while.  Best of all, sit by the river and listen to the water tumbling over those giant boulders.
What “Made It” moments have you experienced in life?
“Made it” moments, huh? Lets keep it writing oriented with the first “off the cuff” presentation I made (at a library) when I wasn’t scared to death and discovered I enjoyed the process.  Or when I bid for and won the honor of hosting the 2005 Western Writers of America convention in Spokane. Or winning a Eppie, finalling twice for a Spur (always a bridemaid, never a bride, dang it) and just this week, being notified that I’m nominated for a Western Fictioneers Peacemaker Award. Oh, yes, and when Books In Motion accepted the first Gunsmith book, In the Service of the Queen.
Some of the books in her Gunsmith Series:

Learn more about the author and her work at  http://twofeetbelow.blogspot.com/ and on her website at www.ckcrigger.com.
Posted by Thoughtful Reflections at 1:11 AM

What a lovely blog! I found you by way of Writers' Cafe on Linked In. Good to meet another Missouri author and health advocate!
Warm Regards -
DK Raymer
http://dkraymer.wordpress.com/

I am happy that you found and enjoyed. You will get to know some fantastic authors here, and learn about their work.

Sounds like just our cup of tea having really enjoyed the new rendition of the movie True Grit from the Coen brothers. C.K. seems to have captured the same great Western spirit!

Thanks, Kit and Jean. I really try to capture the era and the people.

I really like the cover of TWO FEET BELOW, CK! And your tips for writers are great. Thanks for the interview.

Thanks for visiting, Jenny. By the way, I like the over,too. I don't always, so this is wonderful for me.
Carol

Make that cover. Sheesh, but I hate this puny little Mac keyboard!

It's always great to discover a writer whose work is really interesting. Excellent interview!

Thanks, Jacqueline. I'm glad you stopped by.
Carol

I'm a Carol Crigger fan, so I really enjoyed the interview. Nice to see a a hard-working writer making a name for herself. I have read most of her books, and she deserves the recognition.

Thanks for stopping by, Sue. Lovely to have a fan!
Carol

I invite you to get various ideas and your writing on my blog. If you are willing, please contact me on my blog at https://writeforbenefits.blogspot.com