This was a very interesting chat with Nancy, and I am delighted that she gave me the priviledge of interviewing her.
The Lady behind the Mystery 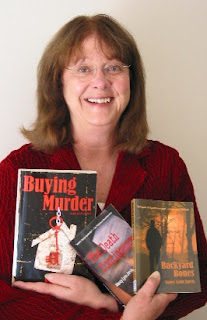 Thank you for the good wishes, Marilyn, and thank you Sylvia for your great questions and for having me on your blog.

The first chapter of "The Widow's Walk League" will be on the website soon. It's kind of creepy...you might want to check near the end of June.
Nancy

Nice interview. It is always fun to meet new authors and find out how they came to the wacky world of writing. LOL

I'm wondering if anyone comes to writing in what might be called a normal way. I watched David McCollough(historian, non-fiction) talk about how he started writing and it was whacky.
Nancy

Great interview Nancy! Good luck to you and all the best!