Kaye George, an Agatha nominated short story writer, is the author of CHOKE, published by Mainly Murder Press, as well as A PATCHWORK OF STORIES, a self-published collection of her previously published stories. FISH TALES: THE GUPPY ANTHOLOGY contains her story, "The Truck Contest.” She reviews for "Suspense Magazine,” and writes for several newsletters and blogs. She, her husband, and a cat named Agamemnon live together in Texas, near Austin.
Tell us about the genre of your work.
Most of what I write is some sort of mystery. My new novel is amateur sleuth, but many of my stories are all over the map and some are even hard-boiled. I do not know why, but my shorter writing tends to be grittier. Just this year I have crossed over into horror. It does not seem that far from noir crime fiction. Just add a dash of paranormal and you have horror.
Why did you choose this genre?
I wrote "literary" short stories during my teens and twenties. When, a few years after that, I decided I really, really, really wanted to see something in print, it occurred to me that most of my reading was in the mystery genre. Since I knew the most about it, it made sense to start at novel length there.
What are some of your books, stories that have been published?
My debut mystery, CHOKE, came out in trade paperback in May of this year. I later put it out myself as an e-book. While trying for years and years to get a novel published, I started having success with short stories, for some reason, and have had a few of those accepted into print and online magazines. Since some of the venues have gone out of business, I decided to put out a volume of those stories myself, called A PATCHWORK OF STORIES. I also have stories available in FISH TALES: THE GUPPY ANTHOLOGY and one at Untreed Reads called THE BAVARIAN KRISP CAPER. There should be one at Sniplits soon, too, if it is not already there. That one is called RESCUE:2005 and is about the aftermath of hurricane Katrina.
Give a short description of each, and what is your newest book? 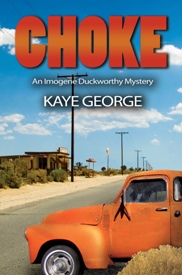 My newest, okay, my only book is CHOKE, ISBN 978-0-9827952-7-9, available at Mainly Murder Press (mainlymurderpress.com). Here is the teaser--
Twenty-two-year-old Imogene Duckworthy is waiting tables at Huey's Hash in tiny Saltlick, TX, itching to jump out of her rut and become a detective. When Uncle Huey is found murdered in the diner, a half-frozen package of mesquite-smoked sausage stuffed down his throat, Emmy gets her chance. Immy's mother, Hortense is hauled in for the crime. Unclear of the exact duties of a PI, Immy starts a fire in the bathroom wastebasket to bust Mother out of jail. On the run from the law with her mother and her toddler daughter, Nancy Drew Duckworthy, Immy wonders, now what?

THE BAVARIAN KRISP CAPER, ISBN 9781611870824, is only available as e-story. It is at:
http://www.fictionwise.com/ebooks/a64124/Kaye-George/?si=0
http://www.fictionwise.com/ebooks/b121731/The-Bavarian-Krisp-Caper/Kaye-George/?si=0
http://www.amazon.com/The-Bavarian-Krisp-Caper-ebook/dp/B004SP1DE0
http://store.untreedreads.com/index.php?
Mandy adores Bavarian Krisp donuts. A nice day at Boston Common with her niece, Ella, turns ugly, though, when her quest for the goodies takes her down a dark path. Out of work and out of donuts. What lengths will she go to in order to satisfy her sweet tooth?
"The Truck Contest" in FISH TALES anthology, ISBN 978-1-4344-3081-9 comes in paperback

http://www.wildsidebooks.com/Fish-Tales-The-Guppy-Anthology-edited-by-Ramona-DeFelice-Long-trade-pb_p_7754.html
(It is also through Ingram and Baker & Taylor)
and as an e-book at
http://www.amazon.com/Fish-Tales-Guppy-Anthology-ebook/dp/B004TM9DL2?_encoding=UTF8&al_rs=#al_rp
http://search.barnesandnoble.com/Fish-Tales/Ramona-DeFelice-Long/e/2940012396365/?itm=4&USRI=fish+tales
http://www.mobipocket.com/en/eBooks/eBookDetails.asp?BookID=422220
https://www.iflowreader.com/ebook/Fish-Tales-The-Guppy-Anthology/164172/.
My story, from a review by Edith Maxwell on her blog, Speaking of Mystery, at http://edithmaxwell.blogspot.com/2011/04/fish-tales-anthology.html:
"The Truck Contest," by Kaye George, describes recreational activities on a lake in winter. I have been working on an ice-fishing story myself, so this was a fun read. The twist at the end was particularly satisfying.
"Twelve Drummers Drumming" is on the Dark Valentine blog http://darkvalentine.net/index.php/2011/01/the-twelve-days-of-christmas-day-twelve/.
This is the last entry for the horror noir version of The Twelve Days of Christmas and takes place on an African safari led by a man who is not too careful about poaching regulations.

My foray into non-fiction is THE ROAD TO SELF-PUBLISHING, a short how-to book for self-publishers.
http://www.amazon.com/dp/B004IEA8EM
http://www.smashwords.com/books/view/36453
Description: A self-published guide to self-publishing. This booklet tells you how to get your eBook onto Smashwords and Kindle, including detailed instructions on creating covers.

Kaye on the left and my friend and writer, Gigi Pandian beside her  at the table I hosted at Left Coast Crime Conference.(On the left.)

Kaye George and Kate Collins signing, and the panel (short story nominees last year) at Malice Domestic Short Story Award 2010. (On the right)
Want to know more about the author?  Check out her website and blogs at: Her homepage is www.KayeGeorge.com
Blogs:
http://travelswithkaye.blogspot.com/, her solo blog,
and, http://allthingswriting.blogspot.com/, her group blog.
Posted by Thoughtful Reflections at 2:44 AM

I'm not a big mystery fan, (I write westerns at Oak Tree Press) but I think I will take the plunge with your stories. You sound like someone who would be fun to know. Like a great person to chat with over coffee and a sweet roll. (The sweet roll makes it super special.)

Dee, thanks!
Bonnie, definitely include a sweet roll and I'll be there.
Sylvia, thanks so much for hosting me here. The interview is awesome.