Interview with Shirani Rajapakse about Her New Book, a Collection of Stories, Breaking News 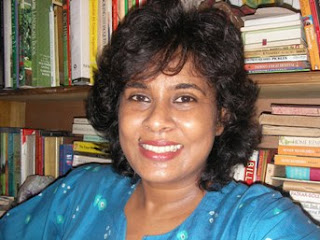 I am a Sri Lankan woman writer. I started writing poetry and short stories about ten years ago. I now write novels and plays as well as short stories and poetry. I spent eight years living and working in India, but I’m back home in Sri Lanka. I’ve been involved with some form of writing for the past twenty years, from journalist to research and presently I’m a full time fiction writer.
I used to work at the Sunday Times and the Daily Mirror, Sri Lanka and in International Organizations including the World Bank and Commonwealth Secretariat. I read for an Honours degree in English Literature from the University of Kelaniya, Sri Lanka, and I have a Masters in International Relations from the Jawaharlal Nehru University, India. My unpublished dissertation for the BA was on Salman Rushdie and titled Salman Rushdie and the Ethics of Liberation.
I love to travel, love animals – I have two dogs. I like photography, listening to music and surfing the net. 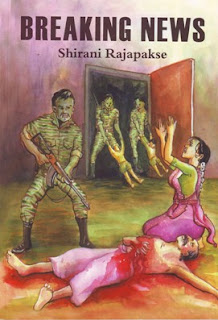 Breaking News is my first publication. It was published in Sri Lanka by Vijitha Yapa Publications in April 2011. Breaking News was shortlisted for the Gratiaen Award 2010 in MS.
Tell us about the genre of your work.
Except sci-fi, horror and crime I like to write in most genre. My short stories are of a mixed genre and my novels fall into the categories of fiction, literary fiction and women’s fiction.
Why did you choose this genre?
I didn’t choose the genre I write in, rather it chose me and I’m happy to go along with it. I believe that my stories choose their genre and I leave it at that. I don’t start writing thinking of slotting it into a particular genre but rather I try to tell the story the best way I can. I leave the genre classification to later, when I have finished writing. I think restricting oneself to a particular genre is limiting to ones work. Genre classification or any other classification is for bookstores and for people looking for a particular type of book to read rather than browse what’s there. It rather narrows ones vision. I believe a story should be good enough to stand above any classification.
My short stories are diverse and fall into several genre.
What books have been published?
Breaking News is the only one that is published, but I’m working on several others.
Can you tell us mor about your book and where we may find it?
Breaking News ISBN 978-955-665-142-3. It is a slim volume of 25,000 words in 80 pages.  Breaking News is available at Vijitha Yapa Publications
-http://www.vijithayapa.com/pdesc.php?id=25822 and also at Amazon
- http://www.amazon.com/Breaking-News-Shirani-Rajapakse/dp/B004WYPAPA
You can find me at - http://shiranirajapakse.wordpress.com/
You can also check out some of my writing on the following sites:
- http://www.writeclique.net/profile.php?ID=1920
http://www.authonomy.com/writing-community/profile/e6b9b560-48ac-4d05-bdde-acece33a8d97/sinharani/
- http://www.triond.com/users/Shirani+Rajapakse
- www.youwriteon.com/authors/publicprofile.aspx?userid=sinharani
Breaking News is a collection of nine short stories of diverse themes. Four of the stories fall into the category of “living under the threat of terrorism,” that’s if there could be such a categorization. One story is set during the height of the Marxist rebellion in Sri Lanka while the remaining stories are light pieces about life in Sri Lanka. What is of interest is that while there are several stories that have been told about the effects of Tamil terrorism and the Marxist troubles in Sri Lanka during the past, Breaking News is different from other stories written about these subjects as it explores situations faced by people from all ethnic groups and almost all social milieu.
Missing Pieces is about a young soldier in the army whose ambitions are cut short as he steps on a landmine. The Boarder reflects the tragedy of a woman who takes in a suicide bomber as a boarder not knowing the real reason for the girls wish to live in her house. Photographs in her Mind is about a mother who loses her family to the violence of terrorists and her efforts to save her only surviving daughter. Sepalika narrated by a young boy living in a remote area speaks of the horror of losing his baby sister to terrorists that walk in to their home one morning. The search for a man that was dragged out of his home by unknown men during the height of the Marxist terror is the theme of Like Driftwood on the Kelani.
The title story of the collection, Breaking News, is also set in the late 1980s but reflects a lighter and decadent side of life in Sri Lanka. Narrated by a bored young woman living in Colombo it is about her views and horror on the slain Marxist JVP leader. The Boy from Wellawatte is about a young man who returns home for a holiday from the UK and his sudden inability to speak any native language much to the amusement of his friends and family.  Man from the East narrated by a young woman is about her search for a husband and reflects the sentiments of society towards an unmarried woman in her thirties. Emerald Silk speaks about a young woman’s dislike of living in the West and reflects the trauma she went through in making a decision to return to her roots.
How do you come up with the names of places and characters in your books?

Most of the stories are set in real life places in Sri Lanka. It was hard finding the names for the characters, as I wanted the names to somehow fit into the type of person each character represented and it was in fact the hardest part of writing. It still is the hardest part of writing any story, as I want each character to have a unique name that somehow reflects their personality.

Four of the stories are about the effects of Tamil terrorism on the lives of people from all walks of life. When writing about these incidences, as they were, I tried to touch on situations and issues faced by people from all social classes and ethnic groups to give it a unique voice.

I lived through thirty years of terrorism, as have many of us; where Tamil terrorists were detonating bombs strapped onto their bodies and blowing people and places up for sport, as it were. It was like 9/11 almost every day in some part of the country for thirty years. We all lived in fear. We never knew if we’d return home alive at the end of the day or be caught to a bomb blast somewhere on the way to school or work. Although the real terrorist war was being waged in the north and east of the country, no one was spared. Tamil terrorist infiltrators made their way to the capital Colombo and other parts of the south to destroy and kill. Trucks loaded with explosives were rammed into buildings killing and destroying, and when the security forces began to enforce checks on vehicles leaving and entering the capital the terrorists used other tactics. Women strapped bombs to their bodies and detonated themselves in the midst of crowds. Security was tight all the time and there were frequent checks on vehicles and people to prevent more bloodshed. It was a traumatic time for anyone to go through. And this was “normal” life for us for a long time. For many children that were born within this period this was what they grew up with – terror and fear all the time. Although I didn’t personally lose anyone to the terrorist war, there were many who did. In writing my stories, I try to document these lives.

Loss and pain are not confined to one ethnic group or social class. Everyone suffers alike. Writing about a young soldier at the war front, I tried to empathize with his situation of being new and having to bear such an immense loss so early in his life. In the early 1990s when I worked as a journalist I had to visit the army hospital for an interview. The image of young men wounded at the front and lying helpless inside a long ward, with missing pieces, stayed with me and was the basis for writing Missing Pieces.

In The Boarder, the story about a suicide bomber, my attention is on Mrs. Kaluarachchi, the woman who takes Selvi, this terrorist, into her house never knowing what Selvi’s real intentions were.  It is only at the end that Mrs. Kaluarachchi realizes how wrong she was and how she misjudged. There were many such instances in real life especially in the capital, Colombo, where suicide bombers passed themselves off as innocent victims of terror to gain sympathy only to turn around and betray those who trusted them.

In the story Photographs in her Mind, I focus on Engamma, a mother, living in the Tamil terrorist controlled areas in the north. She loses her two sons when the Tamil terrorists walk in to her house and take them away to be enlisted in their terrorist army. The pain and trauma she faces in trying to come to terms with her loss and of bringing up her yet unborn daughter is the basis of the story.

The story Sepalika is based on a true story I heard many years ago. It is set in a border village in the north and is narrated by a young boy. He paints a picture of his life; one that portrays almost always having to run to the jungle to hide from the terrorists and of losing his baby sister one day when the Tamil terrorists attacked the village.

There is one story about the disappearance of a young man. Like Driftwood on the Kelani is the only one set in the 1980s during the height of the Marxist insurgency in the country.
The other stories are humorous and show a lighter crazier side of life in Sri Lanka.

Emerald Silk is about a woman who is fed up with her life in the west, and decides to return home because she learned that the grass is not really greener on the other side.

In Man from the East the narrator, a young woman depicts the attitudes of society towards an unmarried woman and her quest to find a man, any man.

Breaking News the title story is about a bored young woman living in the capital Colombo. She reacts to the death of the Marxist leader by bursting into tears. Her family finds out that she is upset not because he died but because he looked different in the photograph portrayed in the newspaper.

Boy from Wellawatte is about a young boy who returns home from the UK for his summer break from College only to find he can’t speak any of the local languages.

I completely agree with Shirani, that you don't choose a genre, the genre chooses you! While I have tried different genres, writing horror is my best-suited. Your BREAKING NEWS sounds fascinating. I enjoy reading about life in other countries and cultures.