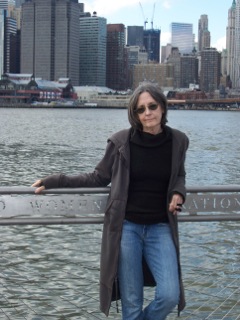 I’m a Manx insomniac who grew up in northern Appalachia, I assisted my dad in his magic act as a teenager and since then worked as a waitress, factory worker, welfare worker, catalogued tribal arts for Sotheby’s, volunteered in Margaret Mead’s office before she died, taught tai chi and yoga. I’ve had poetry and short stories published in ezines, fantasy magazines and anthologies, and wrote “The Toxic Avenger” II and III. I’ve spent over 30 years studying tai chi, more than ten years  doing qi gong and yoga. I have two married children, three grandchildren, a long-suffering husband and I’m watched over by the ghost of a loyal (canine) Australian Shepherd. I lived in NYC for 30 years, Brooklyn for 6, and am now back in NYC (Harlem). At heart I’m pretty much a slacker who enjoys teaching my grandkids “weird stuff.”

Tell us about the genre of your work.
My stories have found homes in SF/fantasy magazines, anthologies, & ezines but the biggest criticism I get is that I don't quite fit into any category (the story of my life).
Why did you choose this genre?
It chose me--and I'm grateful.
What are some of your books, stories that have been published?
Meeting the Dog Girls is the first book of mine to be published, a collection of short stories. Some of the stories appeared in magazines like, Full Spectrum, The Silver Web, Deep Outside, Fortean Bureau, Lady Churchill’s Rosebud Wristlet,  and Fantasy Magazine.  I was a contributing editor of Frigate, The Transverse Review of Books (www.frigatezine.com), and Guru News, a participant in the Bread Loaf Writer’s Conference 2000. I’m a member of SFWA, and wrote parts II & III of The Toxic Avenger for Troma.
Meeting the Dog Girls  NonStop Press, ISBN#978-933065-30-4 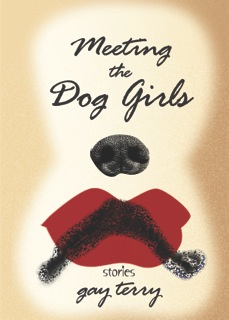 Hard to describe my stories: There are nuns who embroider worlds, glass men, alien neighbors, an ancient China that never was, babies that float down from the sky, a farm on the border between life and death. There was a point when I thought I only wrote about time, death and mine subsidence. But I think I've gone beyond...way beyond. Oh yea, there are definitely some laughs along the way can be found on Amazon:     http://www.amazon.com/Meeting-Dog-Girls-Gay-Terry/dp/1933065303/ref=sr_1_1?s=books&ie=UTF8&qid=1315961298&sr=1-1or at NonStop Press (there's an excerpt here also):   http://nonstop-press.com/?p=1964
My website:    http://www.gaypartingtonterry.com/

How do you come up with the names of places and characters in your books?
I take notes of names, places, things that interest me. Occasionally they appear in dreams.
How did you develop the character of your protagonist in this book?
Some of them are loosely based on people I've known but I suppose they're really all little pieces of me. Yike!
What about an antagonist…is there a unique “bad guy” or a recurring nemesis of any kind?
I've written a few characters that are nasty, for no other reason than they are MEAN to the core. They're fun to write because they can do and say things I wouldn't dare. But most of my characters come up against the world, nature or their own loose qualities.

What’s your favorite thing about your book?
I don't have a firm grasp of reality and writing gives me license to play in my own worlds.
How is writing in the genre you write, different than other genre?
I don't think about genre when I write.
Why and when did you begin writing?
I've been writing off and on since childhood. Sometimes life interfered and sometimes I gave it up thinking I was wasting my time. I got a job, raised my children, took up embroidery (a disaster), tried to  perfect my pie crust (a more tasty disaster)…
What is your writing schedule?
Schedule?
What projects are you working on now, or plan for the future?
I'm always writing stories but I have this fictionalized autobiography, illustrated with old family photos, that I'd love to publish. It's called "Remains" and, ok, it's about death but there are a  lot of laughs in it.
What kind of advice or tips to you have for someone who wants to write and get published?
Read and write all you can, and EDIT!
Are there any other comments, advice or tips that you would give to beginning writers?
Writing is a very strange compulsion, your family and friends will never understand why you want to spend large amounts of time alone and frustrated.
What do you do when you are not writing?
Play with my grandkids, do tai chi, yoga, read, watch mindless TV…
What “Made It” moments have you experienced in life?
When I sold my first story, I felt immortal--it didn't last.

Note from Sylvia: You can visit my other blog at: http://love-faith-and-guts.blogspot.com/that features a preview to my new book released in 2012, Traveling a Rocky Road with Love, Faith and Guts.

Congratulations Gay! You are so gifted and talented. Looking forward to watching the success of Meeting the Dog Girl!

In some way you must be one of the most disciplined people on earth! Qi Gong is more challenge than I'm able to face (now that I'm alone), and you do Yoga and Tai Chi! Besides, you write... I can't get to the other side of my head for the sort of wonderful imagination you must have, but I have wit enough to admire it.