Sharing His Work and His Wisdom, Gerald M. Weinberg and His Newest Book, Earth's Endless Effort

This is an author that has nothing to prove to anyone.  He has been published in both non-fiction and fiction many times. I checked his author page on Amazon, and there were forty-six books listed. All I can say is, WOW!  What a fascinating person who has quite an insight on the world and the people and things in it.
Jerry Weinberg shares his story: 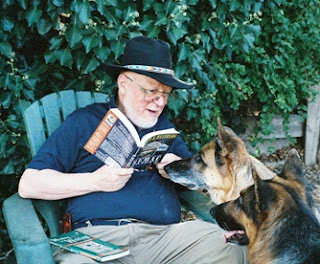 I have always been interested in helping smart people be happy and productive. To that end, I have published books on human behavior, including Weinberg on Writing: The Fieldstone Method, The Psychology of Computer Programming, Perfect Software and Other Fallacies, and an Introduction to General Systems Thinking. I have also written books on leadership including Becoming a Technical Leader, The Secrets of Consulting (Foreword by Virginia Satir), More Secrets of Consulting, and the four-volume Quality Software Management series.
I try to incorporate my knowledge of science, engineering, and human behavior into all of my writing and consulting work (with writers, hi-tech researchers, software engineers, and people whose life-situation could require the use of a service dog). I write novels about such people, including The Aremac Project, Aremac Power, Jigglers, First Stringers, Second Stringers, The Hands of God, Freshman Murders, Earth's Endless Effort, and Mistress of Molecules—all about how my brilliant protagonists produce quality work and learn to be happy. My books may be found as eBooks at <http://www.smashwords.com/profile/view/JerryWeinberg>; on Amazon at http://www.amazon.com/-/e/B000AP8TZ8; and at Barnes and Noble.
Early in my career, I was the architect for the Project Mercury's space tracking network and designer of the world's first multi-programmed operating system. I won the Warnier Prize, the Stevens Award, and the first Software Testing Professionals' Luminary Award, all for MU writing on software quality. I was also elected a charter member of the Computing Hall of Fame in San Diego and chosen for the University of Nebraska Hall of Fame.
However, the "award" I am most proud of is the book, The Gift of Time (Fiona Charles, ed.) written by my student and readers for my 75th birthday. Their stories make me feel that I have been at least partially successful at helping smart people be happy.
Tell us about the genre of your work.

I guess what I do would be called "crossover," as most of my novels touch several genres. For example, in Earth's Endless Effort, the main story is murder—but not the usual kind, as it is a story of preventing the murder of a sentient being. However, since that being is not human, it might be science fiction—and there is a strong romantic element.
Why did you choose this genre?
Because the story comes first, and the story requires those genre elements.
What are some of your books, stories that have been published? Newest book?
Weinberg on Writing: The Fieldstone Method
<http://www.amazon.com/Weinberg-Writing-Fieldstone-Method-ebook/dp/tags-on-product/B004JU0TZS> 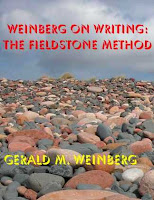 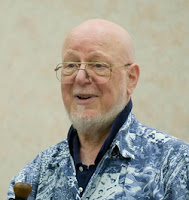 I have received many awards for my writing, but the real "made it" moments are when readers tell me that something I have written has made a difference in their lives. And, my biggest "made it" moment was when I married Dani, 50 years ago. Without her, I would never have become the writer—or the person—I am today.
If you want to know more about the author, his work and explore his world you can do this on his website at: http://www.geraldmweinberg.com/Site/Home.html
Posted by Thoughtful Reflections at 1:43 AM