I grew up on the streets of Brooklyn, NY, where I played a lot of ball. I went to Brooklyn College and then traveled around parts of the world, first by motorcycle and then through various means, with hitchhiking being foremost. Later on, I went to work at a bookstore and then, at a publishing company. Eventually, I got tired of working on other people's books and decided to write my own, and while I was at it, I decided to start my own publishing company. I was always tired of working at someone else’s company.
Tell us about the genre of your work.
I write non-fiction, including a great many biographies, for various age groups. I’ve also created a great many books that offer short profiles of a variety of players, with accompanying photographs. In fact, almost all of my books use a great deal of photography. Most of my books have been written about athletes or sports, in one way or another.
Why did you choose this genre?
It was an accident, like much of life, and it's a long story; entertaining, but long. I guess that I can come up with a short version. I wrote one and it did so well that my distributors, mostly school book club and book fair companies, asked if I could do another one, and then that one did so well…
What are some of your books, stories that have been published?
I've had about 100 books published, including easy-to-read photo biographies about athletes such as Michael Jordan and Derek Jeter. My three most recent books are Gridiron Heroes: Six Heisman Trophy Winners and World Series Showdowns, which were published in 2010, and The All-Time All-Star Team (a book in which I select the best football players of all-time, and include photographs of some of them), which was published in August, 2011. I just completed a new book, Baseball Superstars, which will be available in January, 2012. 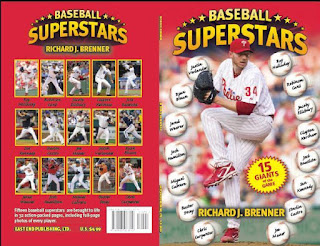 What ages do you direct your books?
I've written for young children (grades 2-3), for slightly older children and 8-12.
Can you tell us more about your books, and how they can be purchased?
That would be too tedious a task, given the number of books. I sell most of my books through Scholastic Book Fair Co. and, sometimes, through Scholastic Book Clubs. I also deal with a limited number of retailers and regional book fair companies. As a publisher, I also sell the titles that I have in print directly to individuals via mail order.  Fortunately, my titles tend to sell out, so I only have, at most, about 6-8 titles in inventory at any one time. Used copies of all, or mostly all, of my books are also available, unfortunately, all over the Internet.
Do your books have a teaching objective?  If so, what is it?
My main objective is to write books that are entertaining enough so that children will find they enjoy reading. Beyond that, I tend to stress the value of hard work, determination, and the ability of individuals to triumph over failure.
What is your favorite thing about your book/s?
The satisfaction that I get from writing a sentence that sounds perfect. If I may add a second one, it’s all the fan mail that I’ve received from children, parents, and educators, telling me how much my books have meant to them.
Is your book illustrated?  If so, would you tell us by whom, and if you worked with an illustrator, can you discuss that experience?
All of my books have photographs, but none of them are illustrated. As a publisher, however, I do work with designers, and I enjoy that aspect of the work, because it allows me to be creative in a different way. I did publish a storybook by another writer a few years ago, which did have illustrations, and I enjoyed interacting with and directing the work of the illustrator.
How is writing in the genre you write, different than other genre?
The most important distinction is that I’m bounded by facts, not the limits of my imagination.
Are there any problems in getting children’s’ books published?
The general answer would be yes, but I’ve been uncommonly fortunate.
Why and when did you begin writing?
I began thinking of myself as a writer during my junior year in high school, when a teacher asked me to read something that I had written to the entire class. It was just about the first time that any teacher had ever cited me for anything except bad behavior. After that, I was asked me to read every piece that I wrote for that class.
What is your writing schedule?
In regard to my professional writing, as opposed to the writing that I just do, I start to write when I close a deal. My schedule, once I get started, depends upon how much time I have to produce finished books. Sometimes it’s loose, and I have time to do the other things that I enjoy, and sometimes I’m working through the day and into the night, for weeks at a time.
Today was the end of a some intense weeks, between the writing, working with a new designer, and dealing with my printer.
What projects are you working on now, or plan for the future?
Right now, I’m not working on or planning anything. I’m just going to, as they say, kickback.
What kind of advice or tips to you have for someone who wants to write and get published?
Write. Read. Write. Write. Write. I was talking to a painter last night who told me that when she stops painting she loses her muscles for painting. Not the muscles in her arm or hand, but the ones in her eyes, and the process that allows her brain to move her brush.
That’s the way that I’ve always thought writing, or becoming successful at virtually anything. Michael Jordan became a great basketball player by playing and practicing basketball for thousands of hours before he ever thought of being paid for doing so.
If someone tells me that they want to write, I always tell them, “then write.”
Getting published, that’s a different story. Although now, with all the publishing that people can do on line, everyone can be a writer or, at least, get published.
Are there any other comments, advice or tips that you would give to beginning writers?
Read out loud. Listen to how words sound, how they play when strung together.
What do you do when you are not writing?
I get a great deal of satisfaction from sailing and hiking, and an almost equal amount of frustration from attempting to play golf. I go to the theater, museums, galleries and concerts quite a bit, and I also enjoy reading, listening to music, gardening, and cooking.
What “Made It” moments have you experienced in life?
Most of the time, I’m simply in the process of living and working, but one time, about 10 years ago, on a bright summer day, while waiting for a golfing buddy to hit his balI, I suddenly had an epiphany: against formidable odds, I had become a successful writer and publisher and, as a result, had also achieved the financial independence that I had been seeking for most of my adult life.

From Sylvia:  My book blog link is:

Great interview! Obviously Richard Brenner is a happy person who is comfortable with himself and his surroundings. I enjoyed reading about him.

Look for my next work "The Last Knuckleballer" A baseball story about the life and times of a Knuckleball pitcher.